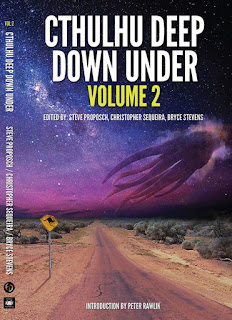 As indicated in my previous post, I here announce the release of the book, Cthulhu Deep Down Under: Volume 2 (published by IFWG Publishing Australia), in which author Robert Hood included his rendition of my frightening encounter with an alien monstrosity and the temporal anomaly its presence created.

It is a strange tale, told using my own words, though Hood has taken considerable liberties with the text of my diary, as he indicates himself in the explanatory article he wrote to announce its publication and to elucidate how it came about. I do not begrudge him that, as he is a professional writer and I am not. I am, in fact, happy with what he wrote. I am aware that being published in an avowed fiction book may be seen to be counterproductive to my efforts to draw attention to the monstrous events that plague our planet, but the sad reality is that no non-fiction publication would be willing to publish it and I would, at best, be treated as some sort of demented idiot. You may read it and think me delusional but at least the story is out there, and you can decide the truth of it for yourself.
You can access Hood's commentary here. The book is currently available in Australia, New Zealand and the UK, and arrives in the USA in September.

In a future posting, I will attempt to give an account of my interaction with my great-grandfather, Dr Hugo Drakenswode, which will, I'm afraid, be fragmentary and without any adequate scientific explanation. Why? Because none is available. What has happened over the years in this regard is inexplicable. I hardly know what to make of it myself.
If you read the story, and have any questions you would like me to address, I would be happy to do so. Just leave a message here on my site.
Posted by cryptohunter at 6:15 PM No comments:

Apology to My Potential Readers ... and Things To Come

First up, I wish to apologise to those who have been attempting to follow my writings. I have been very erratic in updating or adding to this site. Over seven years have passed since my last article. This is too long. The truth is, despite genuine promises, I have been struggling for some time to escape death or worse, and have been forced to keep silent, to temporarily abandon my public presence. Well, that is changing, and in the near future I will elaborate in detail on the dark conspiracy that has been dogging my heels over all those years.

Be assured, however, that I am alive – against incredible odds – and fully intend to begin not only relating my own adventures, but to reveal more about Professor Drakenswode and all he experienced, achieved and recorded in his diaries and disorganised notes – those that still exist at any rate.

I should also like to reveal that a lengthy collection of my own diary notes – notes regarding an incredible experience I went through during January of this year – were briefly up on this site, but I decided to take them down, when the author Robert Hood – who supported me with tolerance for many years on his own website – revealed an opportunity for the story to appearance in an upcoming widely distributed publication. I took the notes I had written here and added greater detail to them, allowing Mr Hood to edit and, in collaboration with myself, give them a more dramatic presentation. The event to which I refer is perhaps the most amazing experience I have yet had, even compared to the plethora of unbelievable stories I could relate regarding Drakenswode's life and times. It involves a monstrous manifestation in a seaside town located on the southern coast of NSW in Australia – one that caused considerable destruction. You would not have heard of it, as much about it was covered up in the aftermath.

I will let you know here – as will Mr Hood, no doubt, on his own site – when the book to which I refer is released. I will just add that this story will change the way you see American writer H.P. Lovecraft and his writings. Fiction? Perhaps not.

Posted by cryptohunter at 12:26 AM No comments: