Having created this blog last week, and looking at it now as the cultural artifact that it will undoubtedly become, I'm conscious of its pomposity, the almost ludicrous pretension that underlies my words. Everything I said was true enough, but the way I said it seems to turn Doug Ormsham into a fictional construct -- a sort of noirish loner burdened by opposition and by doubt and now making a vain attempt to bully himself into a state of conviction and self-justified ambition.

Well, damn it, that's what the truth is like. Or rather that's what any attempt to record truth inevitable requires: a fictionalisation of the chaos of reality that allows our limited minds to grasp the complex and imponderable depths that inform it.

On Saturday, I sat in my makeshift study, surrounded by books and files, sound tapes and film reels, old fading photographs and newspaper cuttings -- all marked with the coded symbols of the esoteric filing system that Hugo Drakenswode assigned to them. To coordinate these is a daunting task and for a long time I found myself unable to see the possibility of coherence anywhere in the random scraps of absurdity that they represent.

Outside my window I could see cars in the distance, a young boy riding a skateboard, one of my neighbours -- Mrs Meštrović, I believe is her name, a Croatian immigrant fully integrated into a society that was, 20 years ago, alien to her -- standing, tea in hand, staring at her roses. All these are evidence of a life that simply does not embrace the realities that Drakenswode persistently uncovered. It is world to which I used to belong, but one I have been forced to abandon. In that world people are part of a communal society that offers them support, both monetary and emotional. Once no longer connected to such a supportive network one easily feels as though one is drifting inexorably toward an abyss, doomed in fact to plunge into it and be lost forever.

I came upon a photographic image that has apparently been doing the rounds of the internet of late, showing a gigantic snake in the Baleh river in Borneo. 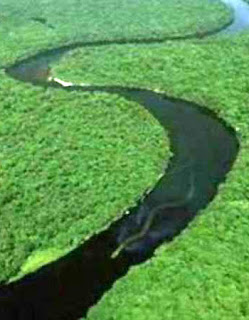 Reportedly this photograph was taken from a helicopter by an unnamed member of a team monitoring flood conditions in Borneo. In this age of digital fakery, it is, of course, easily dismissed -- in this case with good reason. To connect the giant serpent in the picture with a local legend -- the Nabau, "a dragon-like, shape-shifting sea serpent" -- seems in the "real" world to be a somewhat fatuous attempt to give resonance and legitimacy to what is unlikely to be more than a smirking hoax. As such it serves not to enlighten but to obscure the realities of what does, in fact, lurk in the hidden corners of the world.

I found this brief entry in one of my great-grandfather Hugo Drakenswode's archives:

Nabau, giant snake -- Dennison told me he caught such a creature some decade ago and when I showed appropriate skepticism took me down into his cellars, where he uncovered the most enormous snake skin I have ever seen. Perhaps 50 feet in length and yet only a partial item. Extrapolating from it to a full creature I would guess its owner must have been some 200 feet long. Dennison insisted it was not a fully grown specimen. It shimmered, even then, so long after life had been taken from it. I asked Dennison about its origins. He was evasive as to why he had been in Borneo and could not adequately explain how he came to have only a quarter of the full thing. I left thinking that the Baleh river might be a place I should visit.

The photograph may be fake, but need the reality be a falsification as well?

Posted by cryptohunter at 2:14 PM No comments:

My name is Douglas Oudemans Ormsham. I am alone in the world, pursued by a society of evil men determined to gain access to my maternal great-grandfather's vast archive of historical writings. As the leading field cryptozoologist of his day, forced into obscurity by an active and dangerous conspiracy instigated by jealous opponents, Dr Hugo Drakenswode hunted and chronicled vast realities and dark truths that would have broken the minds of lesser men. His legacy holds secrets that some would kill to keep hidden.

Upon his death Drakenswode bequeathed his priceless Library to me -- but I have inadvertently lost much of it and now must strive to recover what I can. For several years I have been fighting a desperate battle against man and monster. Twice I have begun to recount those battles -- and to offer details of Drakenswode's exploits to the world -- and twice have been thwarted. About a year ago, on an online forum, I wrote the following -- but had to abandon that venue almost at its inception due to private difficulties and attacks upon my person. This, however, is what I wrote then, and it still stands in this new endeavour:

This is new for me. Up until now the only web presence I have had has been through the kind ministrations of Robert Hood, who, as co-editor of the giant monster anthology Daikaiju! Giant Monster Tales, set aside a section of his own website to publicise my correspondence with him. This arrangement lasted for some time, but unfortunately in July of 2005 circumstances of a dark and sinister nature conspired to force me into exile, and I have been out of contact ever since. At the time, taking any alternative course may have proven fatal.

Now, however, I can see my way clear to pursuing my original goal of making public the correspondence of the eminent Hugo Drakenswode, my great-grandfather. However, I intend to be cautious. I feel that I should keep the ongoing history and exploration of these matters of profound cryptobiological research separate from the fictional emphasis of Mr Hood's site. That good man should not be inconvenienced (or perchance put in the way of danger) by having direct dealings with me. There is too much at stake. So I am now experimenting with this [deleted] technology as a convenient way of continuing my efforts. It will, I believe, prove to have considerable advantage over previous methods.

However, on this new site I do not plan to recount the history previously explicated in the emails of early 2005. Those missives, as fragmentary and flawed as they are, remain available on Mr Hood's website -- and anyone who would like to get up to speed on the matter should seek for information there. In my next posting I will begin to explain what occurred after the destruction of the Drakenswode family estate of "Cryptonbury" in Hampshire that drove me to take refuge in utter, and bleakly unwelcome, obscurity.

This time I plan to be less timid and less intimidated than circumstances and my own cowardice made me then.

This time I have different resources that my enemies may come to fear.

This time they will not silence me.
Posted by cryptohunter at 9:36 PM No comments: