The Monster in Lake Van

Recent news that a film about the Lake Van Monster -- Turkey's version of the creature that reportedly inhabits Loch Ness -- is currently in production has sensitised me to relevant entries in the vast library of journals recounting the experiences and thoughts of Hugo Drakenswode. I will be seeking to deal with the Loch Ness monster in due course, as its role may be pivotal. In the meantime, however, it is worth remembering that Nessie is not the only "lake monster" in the world, even if she is the celebrity of the bunch.

Lake Van in eastern Turkey is the largest lake in that country and the second largest in the Middle East, measuring 119 kilometres at its widest point, covering 3,755 square kilometres with a shore length of 410 kilometres. In depth it reaches at least 451 metres. Here is a picture of it taken from space (from the Wikipedia entry): 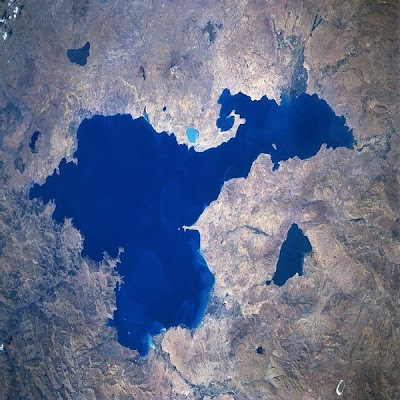 Current folklore and assorted tourist pamphlets claim that there is a monster in the lake. It is said that the Lake Van monster was first sighted in 1995, was supposedly photographed in 1997 and since then over 1000 people have made claim to having seen it. Most of the descriptions and the alleged photographs of the cryptozoological entity suggest a Plesiosaur-like creature similar to the one associated with Loch Ness, though horns, spinal fins and frills are sometimes reported.

To save me from repeating the history of the creature, I have embraced modern blogging technology with sufficient efficacy to embed this video of a TV program that provides most of the relevant details:

Though the earliest date ascribed to sightings of the monster is 1995, here in Drakenswode's journal for 1942, I came across this annotation:

It is my firm belief that the so-called "lake monster" phenomenon -- by which I seek to designate a large aquatic beast with an elongated, serpent-like neck and tail and a thick body -- is neither a delusion nor a jape perpetrated by larrikans or those who would profit from the mystery. Nor are these creatures, which by reputation inhabit many lakes around the world, naturalistic animals that have as yet eluded scientific scrutiny. There is an uncanny quality to them, markedly apparent in their elusive nature and in certain characteristics of the atmosphere and peripheral phenomena associated with them in eye-witness accounts of their doings.

Consider this: in the summer of 1937 I happened to be in eastern Turkey in the vicinity of Van Gölü or Lake Van, at the end lying south of Ahlat. The lake is rather large and is fully enclosed by land, having no outlet, the original outlet having been blocked by volcanic activity in the prehistoric past. I was there seeking a man named Serhan Uygur, who contacted me with claims that some sort of primeval humanoid lived in caves on the slopes of the very volcano that had affected Lake Van's outflow long ago -- Nemrut Dağı. I was unable to trace Uygur at the vague address provided, but learned that he had disappeared a week or two before, after hiking in the direction of Nemrut. From this it could be assumed that he had gone to re-acquaint himself with the domain of the reported humanoids in impatient anticipation of my coming.

As far I was able to determine, I followed his tracks and regrettably found myself lost in an area of scrubby wilderness. I slept wild overnight and on the morrow headed eastward, which I believed would take me back to the village where I had begun this abortive trip. I had once again miscalculated, however, and found myself on the rugged western shores of Lake Van. Believing that an agricultural township lay a few miles southward along the shores of the lake, I headed that way -- by chance coming upon a tribal grouping of the rare Van Kedisi cat, which was reputed to have an unusual fascination with water. This at least I can confirm. I remained to study its behaviour from afar (see annotations under "Van Kedisi" AV-679-1936), becoming so distracted that I barely noted that time had past and evening was once again upon me.

At that point, the several cats I had been watching on a rocky stretch suddenly stopped what they were doing and stared over the darkening water. Fading sunlight corrugated across the water's surface and I perceived a strange glow about 100 yards from shore -- in what was, I was later told, a particularly deep section of the lake. The cats remained motionless for perhaps two minutes. All at once my ears did hum as though from resonance remaining in the air after a loud bell had ceased to chime and the cats, clearly disturbed by this, began to howl in unison. Then as one they turned and leapt away, disappearing at lightning speed into the nooks and crannies that gave this part of the shoreline its rugged appearance.

My line of sight was oriented inland at that moment, tracing the escape routes of the felines, when something large moved in the corner of my eye. I turned quickly, in time to perceive a huge black shape, like a gigantic serpent rearing up out of the water. It was silhouetted against the sky, so I could make out little detail. However, what I could make out was obviously a vast reptilian beast of prehistoric demeanour. Perhaps it had detected the presence of the cats, which must have numbered some five and twenty -- or perhaps it was I that had enticed it to rise. Perhaps it was neither, but mere coincidence. Either way, it saw me now, standing enraptured a mere stretch of the neck away. I did not wait upon its pleasure, but stumbled back, regained my footing and took the lead of the Van Kedisi. After perhaps twenty paces, I could hear nothing behind me, so took the chance to stop and glance back. Nothing was visible, not even ripples upon the water... though I fancied that I caught the last glimmer of a purple glow deep within the waters of the lake.

Though during that trip I found out little concerning the creature I had seen -- the locals showing typical retinence to speak on the matter -- and nor did it subsequently re-emerge, even when, over the following few evenings, I stood in the same spot to tempt it with my presence. During my ramblings, however, I did come upon the mangled corpse of a large man, dead some week or so, by my estimation. Markings on the ground caused me to deduce that his body, dead and bloodied, had been dragged some ten feet from the point of death to where he then lay, half in the water of Lake Van. He had clearly been eaten. Locals, drawn by my calls, identified the deceased as Serhan Uygur, on the basis of a few shreds of garment that remained.

Soon after I was forced to leave the area when a local tribal leader, annoyed by my persistant questions regarding the monster I had seen, somewhat impertinantly accused me of murdering Uygur. Suspicion came easily to the townsfolk and at that time their laws were based more on immediate impressions than on burden of proof. Wisdom dictated a speedy departure and though I am often described as less than wise, in this case there seemed little to be gained by staying to risk a silent knifing in the dark.

In the heat of subsequent adventures I never found time to return to investigate the strange creature that had appeared in Lake Van, though I wondered what the light in the depths had meant and how the beast had contrived to come and go so rapidly. Soon though, my curiosity turned elsewhere.

Just last week, however, I was in Nevada County, California, investigating yet another humanoid sighting -- this one of the so-called Bigfoot variety. My queries led me to the shores of a lake, a lake called Lake Van Norden. The "Lake" is more like a valley that boasts swampland rather than an actual lake, though I am told that when the rains are frequent it easily fills up in an eager attempt to justify its name.

In a nearby hotel I fell into conversation with a travelling salesman who, when he heard what I did with my time, decided to recount several curious tales he'd heard -- not of Bigfoot, but of a huge serpent that is prone to appear on the Lake Van Norden valley floor, amidst the grasslands, if no water is present. Its appearance coincides with storms that fill the valley with an obnoxious buzzing sound and a dull, "funny-coloured" light, as he described it. "I've seen it myself," he said. "A sort of purple glow?" I asked. "Why, yes," he said, "Purple... yes. I was heading westward along the roadway there..." He pointed. "... when the sky beyond the hills darkened and began to reflect a purple light from below. My ears were ringing, too."

"Did you investigate?" I asked.

He looked at me as though he could see now just what sort of fool I was. "I was pressed for time," he added.

Soon afterward he left, though by then several locals who had been drinking in close enough proximity to overhear our conversation confirmed his story, adding more to the description of a serpentine apparition with a bulbous body that had been spied from a distance squirming through the grasslands, heading for the parts of the lake that had not sunk into the earth. One directed me to an exact location and the next day I went there. Nothing eventuated and I could find nothing of interest, though I did not have my camera with me and so when I happened upon a professional photographer there -- a charming bearded man by the name of Edward Weston, who was taking pictures of the lake -- I begged that he might send me one for my records. It came today in the mail in accordance with his word and I include it here.

Notice the broken tree stump in the foreground. A more skeptical man might point out that such landmarks could, during periods of inclement weather, appear to a befuddled observer as a serpent rising from the ground or the water.

Yet I remain less skeptical than I perhaps should be. I am not one who readily dismisses synchronicities as random coincidence. There is much in these two stories that suggests a weirdness of the kind that is my very lifeblood. I may not understand what it means right now -- the two vastly separated Lake Vans, the serpentine sightings, the buzzzing, the purple light, even the reports of humanoid creatures in the same vicinity -- but it is such that I must needs return to these places and these tales to seek truth from them.

Return to them he did, and least in regards to other lake monster sightings.

Note that the photograph that Drakenswode refers to was missing from the file, though I found one that fits the description elsewhere as I sorted through his vast collections of notes and must assume that it is the one. It was torn, stained and creased, with the words "Lake ... West..." still visible in faded pen on the back:

More on Lake Monsters later as I compile Drakeswode's notes.
Posted by cryptohunter at 6:58 PM No comments: